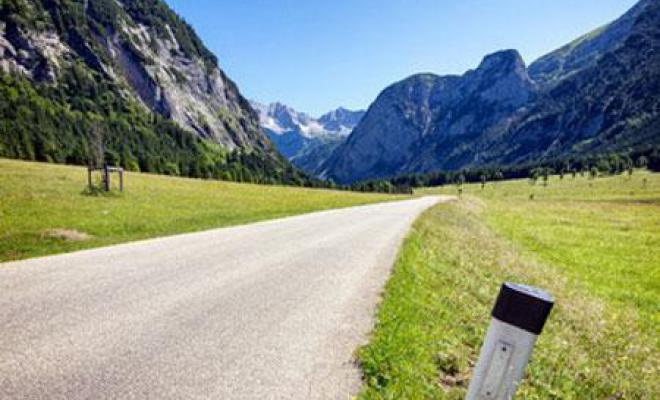 In Germany, a double white line indicates that there is no passing allowed in either direction however in France it's a single solid white line. Know the difference!   Passing etiquette Europe is full of narrow winding roads which can make it difficult to overtake. Often slower cars will use their indicators to let you know whether or not it is safe to pass. However, this definitely isn't an official rule so always proceed with caution.

Life in the slow lane

Keep in mind that in countries such as Germany, France, and the Netherlands it's illegal to use the slow lane as a passage for passing vehicles.
Reverse roundabouts In continental Europe vehicles move counterclockwise through roundabouts, as opposed to the clockwise system we are used to in the UK. Finding exits can be stressful when adjusting to the new system so it's perfectly OK to do a few loops before safely pulling off.

The Greeks and the Italians are famous for their wild driving so it always pays to rustle up your defensive driving skills and be vigilant, even when you have right of way.
The Romans will often consider red lights as optional so never assume you've got a thoroughfare.  Fire up the headlights Particularly in Northern European countries it is often a legal requirement to drive with headlights on, even during the day.

Just like in the UK, driving with a mobile phone in hand is illegal in most European countries. On the off chance that is isn't we strongly advise using a hands-free set anyway.

In France, all cars should be equipped with a DIY breathalyser. Its a weird and wonderful rule yet one that all drivers must abide by.

Europe is becoming increasingly eco-friendly and many cities prohibit entry to cars that dont meet certain emission standards. Always know the rules or you could be slapped with a hefty fine.

Driving in big cities can be stressful to say the least. If you do plan on visiting large metropolises during a European road trip wed recommend parking on the outskirts, then taking a bus or train in and exploring by foot.

In some major Italian cities, cars are banned altogether in pedestrian oriented centres. Look out for signs that read Zona Traffico Limitato as these indicate no-drive zones.

Don't be tempted to try and sneak through them as your number plate will be photographed and you'll incur a fine.